Cash and Cline at OFAC

When the hit movie, "Walk The Line" was released, Bennie was drawn to the story and music of the legendary JOHNNY CASH.  After touring Sun Records (Memphis, TN) in the Summer of 2006, he vowed to learn how to play the guitar that had gathered dust in his office for so long, and give his best shot as a Johnny Cash Tribute Artist.  Instantly, Bennie realized that his vocal registry had an uncanny likeness to Johnny Cash in every way...even his normal speaking voice.  And even from the first moment hitting the stage as "Johnny Cash", it was perfectly clear how natural Bennie's tribute to The Man in Black came to him!

Lori Gravel grew up in upper Jackson County in Bernard Iowa.  She lived in Cascade Iowa from 1984-2014... and then in the winter of 2014 I was called to be a JACKSON COUNTY GIRL again!! She now lives in beautiful area of Otter Creek.

Lori has been singing at weddings/funerals since 1982. I also sing with Nutsy Turtle Band for the past 27 years.
She was the music director for the Ohnward Fine Arts show “Honk, Jr” in 2016.
Lori participated in a vocal contest that lead me to “Country On The River”, and
also participated in the NFR National Anthem Contest.

Lori has also been lucky enough to have sang with the Masked Carol Singers, David Brooks, and played June Carter Cash with Bennie Wheels as Johnny Cash on the Ohnward Fine Arts stage!
Event Media: 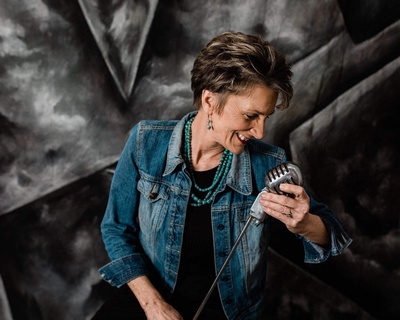 Tickets can also be purchased at The Ohnward Fine Arts Center 563-652-9815 (from 9:00 am – 1:00 pm Monday - Friday), Osterhaus Pharmacy and the Maquoketa State Bank Main Office, Hartig Drug in Preston and the Bellevue Pharmacy in Bellevue.

Tickets are also available on line at www.ohnwardfineartscenter.com.

Run time for show is approximately 2 hours!
Beer, Wine and concessions will be available at the show!