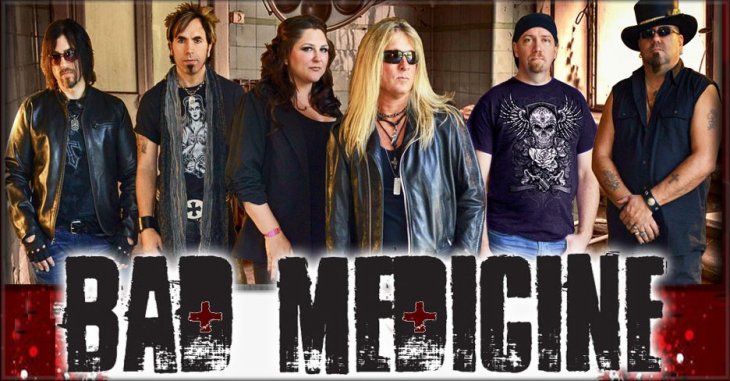 A Bad Medicine show is always "One Wild Night".

Someone once said: Imitation is the highest form of flattery. This is proving to be true in the growing popularity of tribute acts.

Bad Medicine was formed in October of 2002 when a young singer and life-long Bon Jovi fan decided to make his mark on the Chicago Music Scene. After searching long and hard for the talent required to emulate the sounds of Bon Jovi, the band came alive with a collection of 5 individually talented musicians having over 75 years of combined musical experience.

With 9 years of shows Bad Medicine has the look, sound and professionalism that is second to none and is one of the few Bon Jovi Tribute bands that has had the opportunity to meet Jon Bon Jovi and perform for him live.

The band has traveled near and far to perform the greatest Bon Jovi tunes. They have performed in Dallas, TX at the American Airlines arena for the Dallas Desperados vs. Philadelphia Soul halftime show, they performed in Sasebo, Japan for the 4th of July festival on base for the American Troops stationed there as well as the residents of Sasebo, Japan and they also performed at the Pre-Game Family Fest at the Allstate Arena in Rosemont, IL for the Chicago Rush vs. Philadelphia Soul arena game.

Among many places near and far that the band has played, the most memorable event is being invited to perform in Sasebo, Japan for the 4th of July Festival on base for the American Troops stationed there, as well as the residents of Sasebo.

The bands song repertoire runs to over three hours of material covering all the songs made popular by Bon Jovi. They have collected a dedicated fan base of Bon Jovi music fans, as well as fans of live music in general. Word of Mouth continues to spread. If you want a faithful, accurate reproduction of the music of Bon Jovi then look no further.

According to Iowa Governor Kim Reynolds
The Ohnward Fine Arts Center has 841 seats.  We will only be selling 30% of seats leaving plenty of room for social distancing.
Your temperatures will be taken at that time.

This show will have no intermission to reduce social gathering.

If you are sick STAY HOME.  A full refund will be given to you.

All employees and volunteers will be wearing masks.  It is recommended that our patrons wear a mask but it is not required.

In our response to the COVID-19 pandemic, the safety of our artists, patrons, and staff is our top priority. The world around us is changing daily, and although the situation has required us to adjust, it has not lessened our desire to stay connected to you.

Any question please do not hesitate to call the Ohnward Fine Art Center’s Executive Director Richard Hall at 563-652-9815 or email him at Director@ohnwardfineartscenter.com

The First 100 Tickets Are Half Off.
Just $11.00 Each.
Thanks to a grant from
Maquoketa Municipal Electric Utility and WPPI

These half price tickets must be purchased at the Ohnward Fine Arts Center by calling 563-652-9815 or stop in
Monday through Friday between 9 am and 1 pm.

Tickets can also be purchased at The Ohnward Fine Arts Center 563-652-9815 (from 9:00 am – 1:00 pm Monday - Friday), Osterhaus Pharmacy and the Maquoketa State Bank Main Office, Anderson Pharmacy in Preston and the Bellevue Pharmacy in Bellevue.

Tickets are also available on line at www.ohnwardfineartscenter.com.

Run time for show is approximately 2 hours!
Beer, Wine and concessions will be Available for This Show!